Last year, the University celebrated the 20th anniversary of receiving the botanic garden designation from the American Public Garden Association. The first major gift to develop and install gardens and support their long-term maintenance was provided by The Julie & Parker Hall Botanic Garden Endowment, established in 2002. This was an historic gift that allows the University to continue to create environments for the campus community to enjoy year-round. The Hall Botanic Garden Endowment portfolio of gardens include:

The design of the Swift Hall Cloister Garden is a continuation of the Olmsted aesthetic which has influenced the University of Chicago’s campus design for more than a century. Olmsted held a significant role in planning for the Columbian Exposition in Jackson Park in the 1890s, and his successor firm worked on campus in the early part of the 20th Century.  To read more about how the campus gardens fulfill Olmsted’s vision, click here.

While based on traditional cloister designs of highly organized, intimate spaces, this cloister garden is uniquely open on one side to a larger quadrangle that has been incorporated into an overall master plan.  In the original Swift Hall cloister garden drawings developed by Coolidge and Hodgdon in 1926, the garden was to be enclosed by a cloister walk on all four sides.  The north and west sides were never constructed which was fortuitous because it spared three existing oak trees which are now over 120 years old and sit asymmetrically in the space.

This created a design challenge, as most cloister gardens are very symmetrical.  While the fountains and the sidewalks are fairly symmetrical, the planting design inside the beds is very loose. A white color palette was selected for the perennials and flowering shrubs as this color pops in deep shade gardens, along with the chartreuse or mottled leaves of some of the plants in contrast to the deep green of other foliage.

The fountain design took many of the details from the building’s architecture and each basin was carved from a single block of limestone.  The extended play of the water was intentional:  the jets gently bubbling up into the pool, which then falls over a weir into the rill, then falls again into a deep basin, only then to be recirculated back to the fountain.  The sound of water features is both soothing and cooling during the Chicago summers.

During construction, the original stone pavers were salvaged, measured and numbered for reuse in the garden.  The landscape architects carefully fit them back together in a giant jug-saw puzzle to reduce cutting to a minimum.  These pavers provided the instant patina of age and wisdom to the garden. 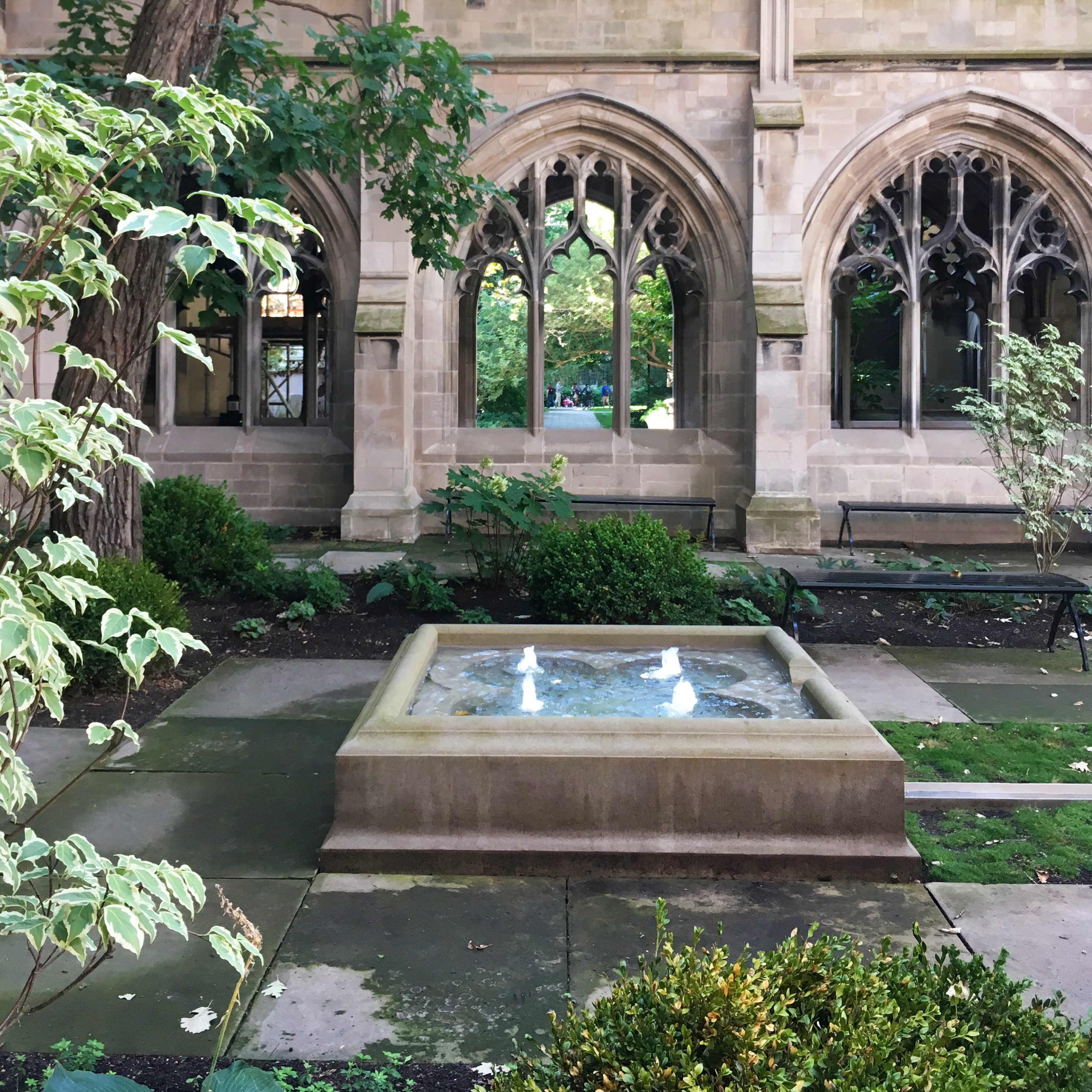 Backless benches provide much sought-after locations to sit and enjoy the garden’s serenity.  They were selected to become background elements that provide the ability to sit in many different positions to enjoy your lunch, engage in conversation, or just appreciate the garden.  As the garden has become so popular, we will be installing additional benches in the summer of 2018.